We wouldn’t have made it through last winter in an old farmhouse without our DeLonghi Oil-Filled Radiator Heater. This portable electric radiator heater effectively heats up a room quickly and maintains it at whatever temperature that you predetermine with the thermostat controls.

The DeLongi was an absolute necessity. Despite having insulated the farmhouse and replacing the windows, it was impossible to heat to comfort using only electric baseboard heat during the winter.

And you paid through the nose for the attempt – American Electric Power bills that approached a higher-end mortgage payment. So, we finally gave up. The heat was maintained, in theory only, just enough to keep the pipes from freezing. We then chose one room to heat, eat, work, watch TV, sit and live. We maintained this room at a comfortable temperature via the DeLonghi Heater. 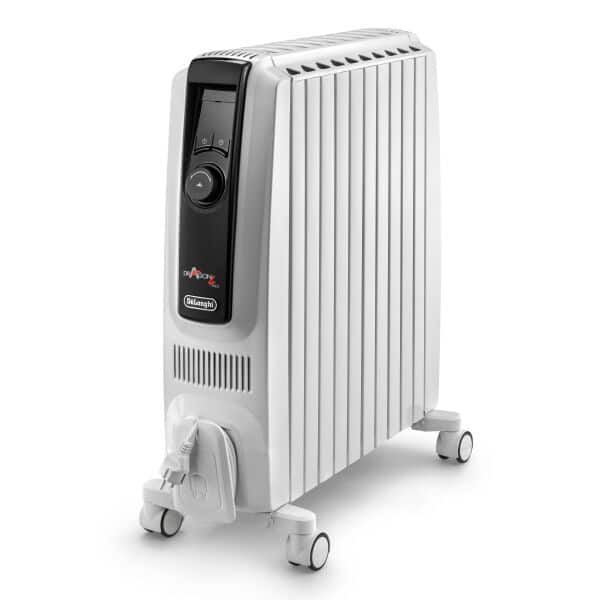 Now, we did not attempt to heat the entire house with this appliance. That attempt would have been futile and the cost to do so would have approached the American Electric Power bill that ensued when we first tried to maintain the household at a comfortable temperature.

I really liked this appliance. It was affordable and portable even while still in the box. The controls were simple enough to operate as soon it was unboxed and plugged in, yet you were provided options such as timed heating and the thermostat so that the appliance could be customized to your exact specifications.

Another aspect that I liked about the design of this appliance was the area between each of the radiator “hump.” The extra exposed area not only increased the heat dispersed, but also – for a neat freak anyway – made cleaning the appliance much easier than older models. One could easily brush-vacuum any dust off the tops and in between the radiator humps and avoid the dirt being burned on.

A great design with insides that obviously work, at a price I could afford.

Dryer sheets are a staple for most households. They keep dryer static at bay and keep clothes smelling fresh for days after a wash....
Read more
Heaters

The Dimplex DGWH4031 is a 4,000-watt electric garage heater. Thanks to an adjustable thermostat, the unit can maintain whatever temperature you desire. You can...
Read more
Dryers

In preparing to build a smaller home, I began researching my needs in terms of laundry and how I will utilize an old washer...
Read more

Baywords.com is all about privacy and knowledge freedom. You want to read about mariuana? We got it covered. Want to read about crime? We got that too! Gardening? No problem. DIY stuff? You bet it!

How to Buy a Quality California Hemp Products